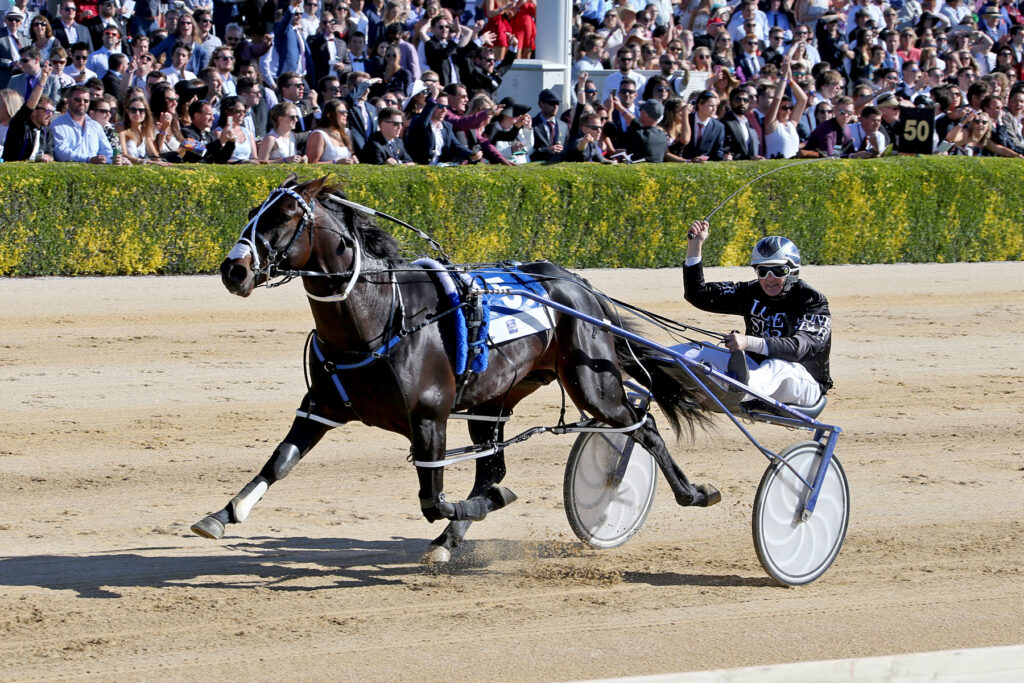 Lazarus is our greatest living standardbred. A true champion of the sport.

He’s shown his greatness around the world and now he’s coming home to New Zealand.

The frustration of New Zealand breeders unable to get semen from Lazarus is over.

It’s a new chapter for the mighty son of Bettors Delight and no stone will be left unturned to make it work.

Lazarus will be standing at Alabar in Auckland this season. He will return to Deo Volente Farms in New Jersey at the conclusion of the breeding season but, all going well, he’ll return to Auckland every year from now on.

“Taylor Made Stallions approached us and asked if we could help. They were keen to stand Lazarus in New Zealand with us and we couldn’t wait to say yes, said Alabar NZ’s Graeme Henley.

“The New Zealand climate, the natural environment of our farm, the expediency of shipping semen out of Auckland, the experience of Alabar and the close relationship we have with Deo Volente, who have gone so well with him in America, are all things that will work in Lazarus’ favour.”

“We know Mike Gulotta at Deo Volente Farms well and he is extremely positive, not only about Lazarus’ breeding capabilities but also about how great his first yearlings look. This has given us the confidence to go forward.

“We ask breeders to give Lazarus a chance. We’re really excited. It’s a chance to change a bit of history.

“Breeders can be assured we’ll be conservative and transparent.

“If this season goes well then Lazarus will continue to shuttle to New Zealand for the rest of his career – that’s something worth fighting for.”

Worth fighting for indeed! After all, Lazarus is the horse that all modern day horses are measured against.

He carved out one of the greatest Australasian careers ever – along the way amassing 15 Group One victories.

He won the Harness Jewels as a two-year-old and then swept all before him, going unbeaten in nine starts as a three-year-old.

His Group Ones as a sophomore being the NZ Sires Stakes Final and the Northern, NZ and Victorian Derbies.

It was an astonishing performance that remains one of the greatest victories ever seen in this part of the world.

He backed up to win the NZ free-for-all before venturing to Australia to win the Victoria Cup, 4yo Bonanza and Chariots Of Fire. He then returned to New Zealand to take the Taylor Mile / NZ Messenger double at Alexandra Park.

As a five-year-old he defended his NZ Cup crown (with a 5¾ length romp) in what was to be his last New Zealand start. He bypassed the NZ free-for-all to head to Perth for the $1.1 million Interdominion – which he duly won after sitting parked throughout.

While in Perth, Lazarus produced what to many is his greatest performance in running a close second in the Fremantle Cup – after sitting three wide without cover for all three laps of the tight Gloucester Park circuit.

He showed his remarkable resilience by then sitting parked out to win the $500,000 Hunter Cup at Melton – after a gruelling 36 hour float trip across the Nullarbor.

In North America he created a huge impression. So much so that he was fully syndicated amongst the major North American studs and breeding farms.

Possibly his most eye-catching performance in North America was at The Red Mile where he sat parked the entire mile and was still timed in 1:46.6. Trainer, Jimmy Takter felt he could’ve challenged the world record if he had been able to race on the rail.

Lazarus has received wonderful support in North America and his first crop of yearlings will sell later this year.

Lazarus is incredibly well placed to succeed in North America – and, now, New Zealand breeders are back in the game as well.